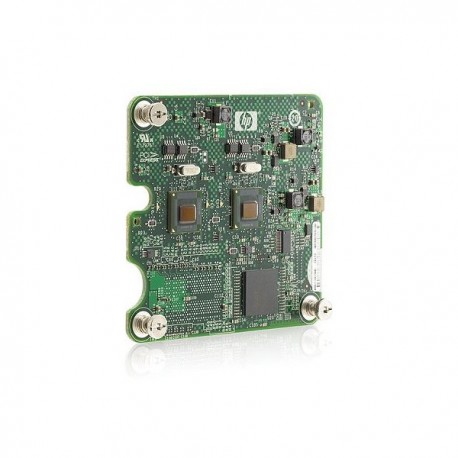 The HP NC364m is a HP BladeSystem c-Class network adapter providing four Gigabit Ethernet ports on a single card saving valuable server mezzanine slots for other purposes. The x4 PCI Express NC364m is supported on Integrity and ProLiant c-Class server blades in all mezzanine slots. For Integrity c-Class servers, it is the first network adapter mezzanine option available providing up to 16 Gigabit Ethernet ports per BL860c server, 128 ports per c7000 enclosure. For ProLiant, the NC364m is the second quad-port adapter option for c-Class allowing ProLiant customers a choice between an adapter that uses either an Intel or Broadcom controller.; The NC364m is ideal for virtualization, security, server consolidation, network segmentation, and other server applications requiring maximum throughput and port density. The total aggregate throughput of 4Gbps also meets the needs for customers desiring high bandwidth but are not yet ready to move to 10 Gigabit Ethernet.

Laurence
The website and checkout process is easy, the customer support are also very friendly and responsive.
Martin
First class service, prompt dispatch/delivery. Thank you.
John
Excellent Thanks...
Lesley
Really helpful employee answered my questions and assured me I could return product if it didn't work as successfully as I hoped. I did later need to return which meant paying £10 as through best...
Catherine
The service I received from Netstore Direct was excellent from start to finish. The products were exactly as stated on the website. The purchasing process was simple and I was kept well informed at...
Bill
all good quick delivery
Anonymous
Such a good company!!!!!!!!!! Amazing sevice
Abdus
Very good service and fast delivery. A*
Adrian
Always competitively priced and good delivery service. Products are of a good standard and were recently very helpful on the phone when I called for advice.
Colin
Excellent quick service
Andrew
easy to navigate website, keen pricing and fast delivery. would recommend to friends.
Andrew
Used this company several times now and will continue to do so. Good products at a good price and excellent service and delivery.
Ian
very happy
Sufyan
Prompt and secure delivery. I will be ordering more products such as patch panel, network switch, rack...etc. I will be calling through for advice so hopefully they are knowledgeable over the phone!
Anonymous
Very Fast Delivery, Products Exactly what expected and of a good quality standard. Delivery Prices may be a little too high but I understand that this company normally ships large shipments anyway.
Hiren
Easy to order - so website was great. Next day delivery and when I had a query they managed to answer it immediately via email.Overall great service
Rastislav
product was on stock, with competitive price
Michael
Swift response to order
David
The goods were in stock and they were delivered on time.Many thanks, great service.Kind regardsDavid
Anonymous
Great, fast service as usual.