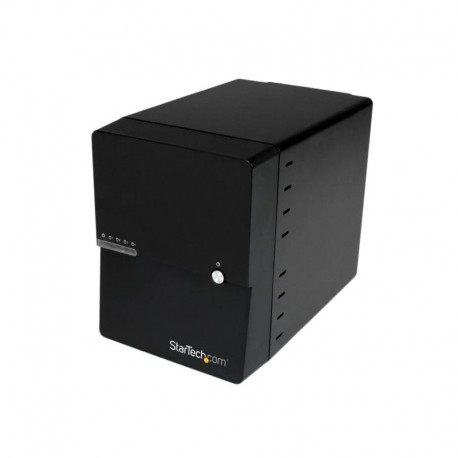 Add four 3.5" SATA III hard drives to your computer externally through USB 3.0 with UASP or eSATA

The S3540BU33E 4-Bay HDD enclosure lets you install four 3.5” SATA hard drives into an external enclosure, and connect to your computer through USB 3.0 or eSATA.

For fast performance and efficient data transfers, the enclosure supports SATA III transfer speeds -- up to 6 Gbps when connected through eSATA. The versatile enclosure can also be connected through USB 3.0, with support for UASP, performing up to 70% faster than conventional USB 3.0 when paired with a UASP-enabled host controller. See our UASP testing results below for further details.

The S3540BU33E is backed by a StarTech.com 2-year warranty and free lifetime technical support.

UASP is supported in Windows 8, Mac OSX (10.8 or above), and Linux. In testing, UASP performs with a 70% faster read speed and 40% faster write speed over traditional USB 3.0 at peak performance.

At the same peak in testing UASP also shows an 80% reduction in required processor resources.

- Versatile connectivity options, through either USB or eSATA
- Maximize performance, with file transfer speeds up to 6Gbps using eSATA
- Keep your drives running cooler, with a built-in fan